That’s right, folks: I’ve finally read a Stephen King novel all the way through! I tried to read some of his stuff in high school (I think I got half-way through Insomnia and a few chapters into The Shining before I called it quits), but I decided to give him another shot, largely due to the amount of people in the bookstagramming community who are obsessed with him. I began to wonder what exactly it was that I was missing out on.

Well, I can tell you what that “it” was: everything. I picked up my copy of Misery yesterday, thinking I’d read through a few chapters and see how I felt… and a few hours and 200 pages later, I still hadn’t moved. If not for how late it had gotten, I would’ve finished off the remaining 100-odd pages no question, but I decided to hold off until the morning. And then I finished the rest in one more sitting. Ha! I have no idea when the last time something like that happened, reading a 300+ page book in two days. What I’m trying to say is, this book was so good!!! 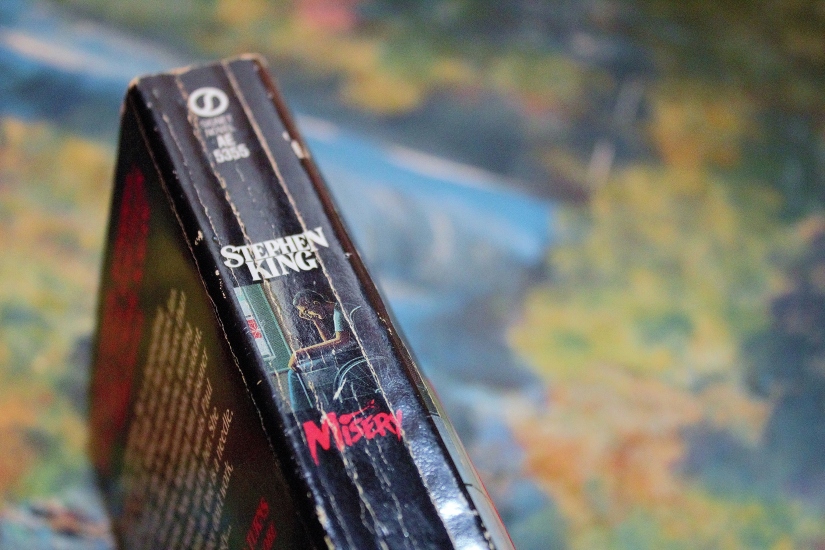 Obviously, he had it right: it was amazing. BUT THE BOOK, THOUGH. I’m really surprised at how close the movie kept to the novel, but boy, the book is so much more intense. And that ending! Oh man, oh man. I don’t think I’ve ever literally been on the edge of my seat while reading a book before, but that definitely changed with this’n. King knows his suspense, that’s for sure. Even though the movie was still pretty fresh in my memory and I knew how it all played out, I just could not put this book down!

I honestly don’t know why I never tried reading more King. It just wasn’t my thing in high school, for whatever reason — probably ’cause I picked slower novels and didn’t give them enough of a chance… except for Insomnia. That book is a monster (nearly 800 pages), and I just couldn’t do it back then. But I’ve always enjoyed the movies based on his novels. And I’ve had plenty of people rave about him to me. But, I dunno, I was just never really feeling up to what I used to consider a challenge. I had become accustomed to short story collections and shorter novels, so much so that I thought I wouldn’t make it through a larger novel (I know 300 pages isn’t all that big, but it had become a massive task for me in recent years) or I’d get bored half-way through or something.

And you know what? I’m so glad I picked this book up, not just so I can say I’ve finally read a Stephen King novel, but because I feel like this has finally gotten me out of my slump. I’ve been reading a lot more lately, sure, but they’ve all been — as I mentioned before — short stories or short books. I honestly didn’t know when I would be ready for a bigger (aka regular-sized) novel again. But you read it here first, folks: Kara the Bookworm is back! High-fives all around! And now… on to the next!