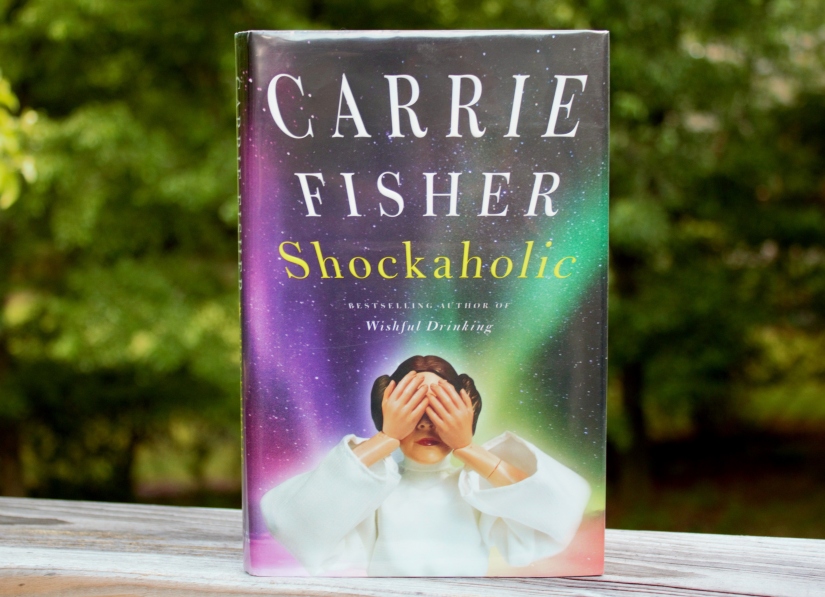 There is no shortage of people flocking to hear what Princess Leia has to say. Her previous hardcover, Wishful Drinking, was an instant New York Times bestseller and Carrie was featured everywhere on broadcast media and received rave reviews from coast to coast, including People (4 stars; one of their top 10 books of the year), Entertainment Weekly, New York Times, and scores of others.

Told with the same intimate style, brutal honesty, and uproarious wisdom that placed Wishful Drinking on the New York Times bestseller list for months, Shockaholic is the juicy account of Carrie Fisher’s life, focusing more on the Star Wars years and dishing about the various Hollywood relationships she’s formed since she was chosen to play Princess Leia at only nineteen years old. Fisher delves into the gritty details that made the movie—and herself—such a phenomenal success, admitting, “It isn’t all sweetness and light sabers.” (Goodreads)

Now, I love Carrie Fisher as much as the next person, but I’m gonna be honest here and let you guys know that… I wasn’t all that crazy about this book. This was my first Fisher read, and I guess I was just expecting a lot more from how everyone’s talked about her books. Maybe it’d be different if I would have listened to the audio book instead. But, I didn’t. So here we are.

I chose Shockaholic over her other books because a friend told me that she talks a lot about her strange obsession/addiction to electroshock therapy (or electroconvulsive therapy [ECT]). I mean, how could I not get this book after knowing that’s what it’s about?! I love reading about crazy shit like that, and it was super interesting to hear about it from her perspective and to hear how normal she makes it sound. It’s apparently nothing like it is in the movies. It’s still not great, of course — I mean you’re literally messing with the electric pulses in your brain — but it’s definitely not as intense and vegetable-inducing as I was made to believe from movies and whatnot. She does talk about how it’s affected her memory and how she’s lost chunks of time from ECT. Crazy. But then, she didn’t mind taking all sorts of mind-altering drugs, so I guess they kind of go hand in hand.

The writing itself was… meh. But then, it is a celebrity memoir. I can’t imagine there are too many autobiographies written by celebrities that show like, superb writing skills or anything. But the content was entertaining enough. I learned a lot about her dad, which I wasn’t expecting when I went into this book. Roughly half the book (not an exaggeration) was just stuff about her dad. But kind of repetitive stuff. Like how he was never there. Or when he was there, they just hung out and did drugs together. And then she’d drift off and start talking about something completely different, like an apartment she lived in when she first moved out, or Michael Jackson. It’s pretty all over the place. Very stream of consciousness. Which, again, would probably have worked better for me if I would have listened to the audio book. Because then it would have felt more natural, like she was literally just sitting down with me and telling me her life story, complete with side-thought interruptions and going off on anecdotal tangents. But it just felt so scatterbrained as a novel. It just wasn’t really my thing.

I’m definitely glad I read it, though, because I really didn’t know much about Carrie Fisher at all before. So, it wasn’t the most amazing book (or memoir, for that matter) that I’ve ever read, but it was pretty interesting, and I’ll probably pick up another one of her books soon to learn more about her life (rather than her father’s). Maybe next time I’ll just stick with the audio book.